The Plei Me Siege and Opening of the 1st CAV Pleiku Campaign In the late summer and fall of 1965, the PAVN B-3 Front is established in the Central Highlands of Vietnam under command of Brig Gen Chu Huy Man. Gen Man has tactical and administrative control over both People’s Army (North Vietnamese) and Viet Cong units. The PAVN units are the 320th, 33rd, and 66th Regiments.

Gen Man is charged with the mission of bringing the new high tech 1st CAV Division to battle; learn how it fights with airmobile tactics and new modern gear; and put this into writing for dissemination to all PAVN and Viet Cong units. To record this information as it is gathered in battle, Lt Col Hoang Phuong, a historian, is to debrief PAVN commanders after the battles.

In October, the 33rd Regt attacks Plei Me Special Forces Camp approximately 40 miles south of Pleiku City in the Pleiku Province. Plei Me is garrisoned with a 12 man US Special Forces Team and 350 Montagnard mercenaries under the command of MAJ Charlie Beckwith (creator of the Delta Force). The siege continues for several days. An Army of Vietnam relief force is sent out from Pleiku and is ambushed enroute by the PAVN 32nd Regt. 1st CAV Artillery supports the ARVN column and the ambushers are beaten off, and the siege is lifted. The 1st CAV Division is then committed in late October to find and destroy the defeated enemy. The 1st Brigade pursues the withdrawing enemy force over a very large area south and west of Pleiku City and west of Plei Me. It harasses and hounds the 33rd into the eastern area of the Ia Drang Valley.

The two most significant events are the capture of a PAVN Field Hospital on Nov 1st along with numerous troops, weapons, and enemy documents; and the ambush of a unit of the fresh 66th Regt along the Ia Drang River in the western area of the Valley.

On 10 Nov, the 3rd Brigade relieves the 1st Brigade and moves into the area to the east and west of Plei Me and conducts patrolling actions. No enemy contact. UPI reporter Joe Galloway accompanied 1/7 CAV units on these patrols.

Late in the afternoon of Saturday, 13 Nov, the 3rd Brigade Commander, COL Thomas Brown, gave the 1st Bn, 7th Cavalry commander, Lt. Col Hal Moore orders to move his battalion on 14 Nov into the Ia Drang Valley with the mission: “Find and kill the enemy”. Moore would have 16 Huey helicopters to move his unit. Two 105 mm Howitzer batteries (12 tubes) to render fire support. Three battalions of PAVN were reported to be in the Valley.

Moore put out a warning order to his staff and 5 company commanders, made a map study, formed a tentative plan, arranged for supplies, and set up an air recon for early 14 Nov to select a landing zone to be followed by the operations order to the staff and commanders.

The air recon goes as planned and at 8:50 AM, 14 Nov Moore issued his operations plan of maneuver and plan of fire support. All companies were to land in one clearing dubbed landing zone X-Ray. LZ X-Ray could hold 8-10 Hueys. It is 14.3 miles from the pick-up areas around Plei Me. Moore would land with the assault company after prep fires by 105 mm howitzers and aerial rocket artillery. Moore’s command chopper, overhead with its bank of radios, would carry his operations officer, forward air controller (USAF), fire support coordinator, and helicopter liaison officer.

The fire support was to begin at 10:17 AM with the air assault landing hitting the ground at 10:48. In this enemy base area, Moore would keep his companies within mutual supporting distance of one another. His principal concern is that the lead assault company would get heavily engaged before the rest of his battalion could be shuttled into the battle area – under fire.

Camp defenders, buildings, and bunkers inside the wire of Plei Me were especially vulnerable to enemy mortar fire. 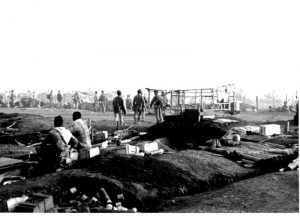 More shots of camp defenders — Montagnard forces, special forces troopers, and Vietnamese Army during a lull in the siege. Debris was everywhere 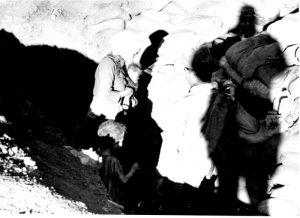 Montagnard striker's wife and kids live right outside the wire. Taken at Plei Me 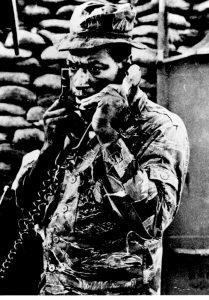 CPT Tommy Thompson, XO Det B-57, coordinates air support during Plei Me seige. Great Story: Well, the story goes like this (personally witnessed by me (Galloway), sitting right there beside them): Tommy Thompson was handling the radios, calling in the air strikes, coordinating parachute drops of pallets of ammo and food (most of which landed out in enemy territory and not inside the camp) and dealing with various HQs. He constantly had two PRC25 handsets, one on each ear. Suddenly a huge grin came over his face. "Cholly (talking to Beckwith), man wants to talk to you." "Who the *** is it?" "Cholly, man say he's the President." "President of WHAT, fer christsake?" Even bigger grin. "Cholly, man say he the President of the U-nited States of America." Beckwith grabbed the handset which squawked and yammered loudly as Lyndon B. Johnson, President, was patched through God alone knows how many Puma and Tiger switches began congratulating Maj. Beckwith and his valiant sojers on the fine job they were doing defending the farflung frontiers of democracy etc etc etc. Beckwith held the handset a good ten inches from his ear; we could all hear Johnson drawling on. A look of utter disgust came over Beckwith's face. Finally after some grunts and "Yessirs" on the part of Beckwith, LBJ said bye and let Beckwith and Thompson get back to fighting the war.